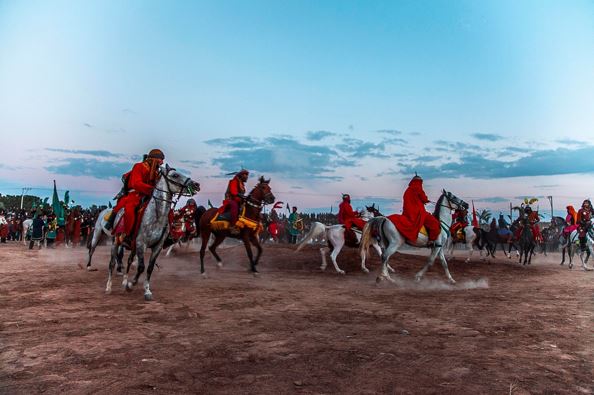 Ta’ziyeh; An Iranian Play Telling the Story of Ashura

Travelling to Iran during the month of Muharram is an ideal opportunity to experience Ta’ziyeh ( Ta’zieh or Ta’zïye or Ta’zīya or Tazīa or Ta’ziyeh ), the only form of serious drama developed in Iran and the Islamic world. It is also registered on UNESCO’s List of the Intangible Cultural Heritage of Humanity in November 2010.

Actually, when you come to Iran during Muharram, the face of the country dramatically changes.  People wear black, go to mosques, Tekkiehs (temporary establishments set up in each neighborhood) or even to private houses of their neighbors, listen to an oral recitation called Rawzeh, do chest beating (sineh-zani) in rhythm with a mournful song (Nowhe) and, finally, eat a sort of charity food (or Nazri) which is distributed among the participants of these ceremonies (in Persian, Azadar-an) by those who desire to fulfill their wishes by offering an act of goodness to God.

Furthermore, you may observe various large processions (or Dasteh) in the streets, carrying banners (Alam) and beating drums accompanied by another musical instrument known as Senj. A usual scene in these processions is that of people beating their shoulders with chains, a tradition called Zanjir-zani, as a very mild form of self-flagellation. All these scenes repeat again and again during the first ten days of Muharram, climaxing on the 9th and the 10th days, respectively known as Tasu’a and Ashura. And if you ask Iranians about what you see, they answer they are mourning for the martyrdom of Imam Hussain in the Battle of Karbala.

In addition to all the rituals and events mentioned above, you also have the possibility of attending a passion play which is known as Ta’ziyeh. The manner in which Ta’ziyeh is performed has a long tradition. Normally, people gather in a vast piece of land and form a circle. Within this circle, the actors reenact the story of the tragic events which happened to Imam Hussain and his loyal followers on the plain of Karbala.

In this article, first we introduce a brief history of the events which lead to the martyrdom of Imam Hussain. Then, we will tell you the story and characteristics of Ta’ziyeh. And, finally, we will introduce the best places to visit this fascinating religious ritual.

The Story of Muharram and Martyrdom of Imam Hussain

In the spring of the year 680 CE, Moawieh died and his son, Yazid, cam to the throne as the Caliph of the Muslim world.  However, this hereditary possession of power met with strong oppositions in the Arab community. One of the groups which expressed a strong opposition to this manner of electing the leader of Muslims was the party or Shi’a of Ali ibn Abi Taleb, led by his second son and the third Imam of Shias, Imam Hussain.

In this atmosphere of political conflict, people of Kufa invited Imam Hussain to their town as the leader of their movement against Yazid. But, when Imam Hussain reached the plain of Karbala on the second day of Muharram, he faced the Kufan army blocking his way to the town. Actually, a large army of 4.000 men was standing against this courageous man who was followed only by his family and seventy two of his most loyal followers.

Here, the head of the Kufan army put the choice to Imam Hussain: to pledge allegiance to Yazid or to fight. But, to defend true Islam, Imam Hssain decided to fight. And so the Battle of Karbala began on the tenth day of Muharram. It lasted from sunrise to sunset and, at sunset, all the loyal followers of Imam Hussain were martyred, Imam Hussain himself beheaded by Shimr.

Since then, the memory of the martyrdom of the “wronged martyr” (Shahid-e Mazloom) or the “commander of martyrs” and his sacrifice of life, all for the love of God and defense of Islam, has remained with Shia Muslims, specially the Shia Muslims of Iran. For this reason, each year Iranians commemorate the death of Imam Hussain, remembering him as the holy man who stood against the oppressors and wrong doers. Among all the rituals hold as a part of this act of remembering, Taziyeh, the reenactment of the events of the battle of Karbala, occupies a special place. Go on reading to gain a full knowledge of this religious, uniquely Iranian play.

The Story and History of Ta’ziyeh

Ta’ziyeh can be traced back to ancient Persia and Mesopotamia with roots in sacrificial ceremonies aimed at fertility or mourning for the martyrdom of young heroes like Zarir and Siavash. It was further developed to a large extent in the Islamic era following the martyrdom of Prophet Mohammad’s grandson and the third Shiite Imam, Hussain ibn Ali, in 680 AC.

In the 17th century, towards the end of Safavid era, there was a new climax of urban performances in Iran. During this time the economic and industrial infrastructures, roads and bazaars were considerably improved. Consequently, Ta’ziyeh reached the stage where it emerged as an elaborate religious performance, including a number of dialogues and characters, and mainly performed by members of the community who consider being selected for the role a spiritual honour. During the Qajar era and through strong support of the Qajar rulers, a special building called Tekyeh was built to house Ta’zieh performances. Today, there are 150 registered Tekyehs in Iran.

Dialogues are all colloquial, rhythmic and in essence either heroic or tragic.

Characters represent different groups of people in society. Among them are infants, teenagers, the young, newlyweds, a loyal brother or sister, mother, patients, the elderly, kings, shepherds, genies, animals and angels; likewise, dark characters and antagonists. Characters such as the greedy, the prostitute and a most interesting character named Al-Hurr b. Yazid al-Riyahi, who was first a commander fighting against Husayn ibn Ali and then martyred due to his support for Husayn ibn Ali in the Battle of Karbala, have all increased the richness, vitality and also the popularity of Ta’zieh. In general, Ta’zieh is a kind of highly affecting performance in which roles have become symbolic representations, either spiritually respected or the opposite.

Dialogues are mainly written in Persian, Turkish and Arabic.

By request of Naser al-Din Shah, the fourth Qajar ruler, more Tekyehs were built in Tehran and other cities and additional stories and dramatic dialogues were added to the traditional Ta’ziyeh narrative to include worldly concerns.

Trumpet and drum are the main instruments; however, there are many variations.

The styles are specific to each performance and represent classical and regional music in Iran. Only the righteous characters have singing parts in a performance. Children with a good voice are also given singing roles after developing their vocal skills.

The set and props are simple and symbolic. For instance, a washtub may symbolise a river or a ladder symbolises a tower. There is usually no make-up applied. Visuals are also plain in style, without much added embellishments; for example: hiding hands in one’s shirt to represent Abbas ibn Ali’s cut off arms or using a blanket with the picture of a lion to represent the actual animal.

The stage is often round with the main characters such as Husayn ibn Ali and his family, mostly in the centre and the antagonists along the edges. This signifies the family’s spiritual position and their isolation when surrounded by the enemies.

Colours come in a wide range and often have symbolic meanings.

White is only used very occasionally to represent both angels and the righteous like prophets. Wearing white also may symbolise martyrdom.

Yellow symbolises doubt. A character such as Al-Hurr b. Yazid al-Riyahi may be costumed in yellow at first to represent his grappling with doubt and then green as he makes his major decision to join the army of .Husayn ibn Ali. The role of Umar ibn Sa’ad, a commander fighting against Husain ibn Ali; is costumed in yellow at first and then red to symbolise his dark character.

Blue symbolises happiness. For instance, the performer who assumes the role of Qasim ibn Hassan wears blue at the wedding.

There are two classifications:

The performance is either held indoors at Tekyeh or outdoors in open grounds.

The episodic performance is sometimes but not regularly held in different parts of an area. Arak Historic Bazaar is one location particularly known for this type of performance.

Men selected for their soft voice and gentleness usually perform female roles. However, this trend has periodically changed, for instance, during the Qajar era more women began performing female roles.

In its heyday, Ta’zieh was synonymous with modernity and social reforms like the emergence of the print industry, modern schools, newspapers and the theatre in Iran. Yet, its popularity declined towards the end of the Qajar dynasty in early 20th century.

At present, Ta’zieh is recognized as a historic and national theatrical form as well as a religious ritual. The country plays host to people from all around the world to experience this important cultural, religious, and social event in Muharram, the first month of the Islamic year.

The Best Places to Visit Taziyeh

Ta’zieh is performed in many villages and cities of Iran, but here we are going to introduce you the best places where you can have a unique experience of this ritual play.

Read More: 10 things to know before travelling to Iran