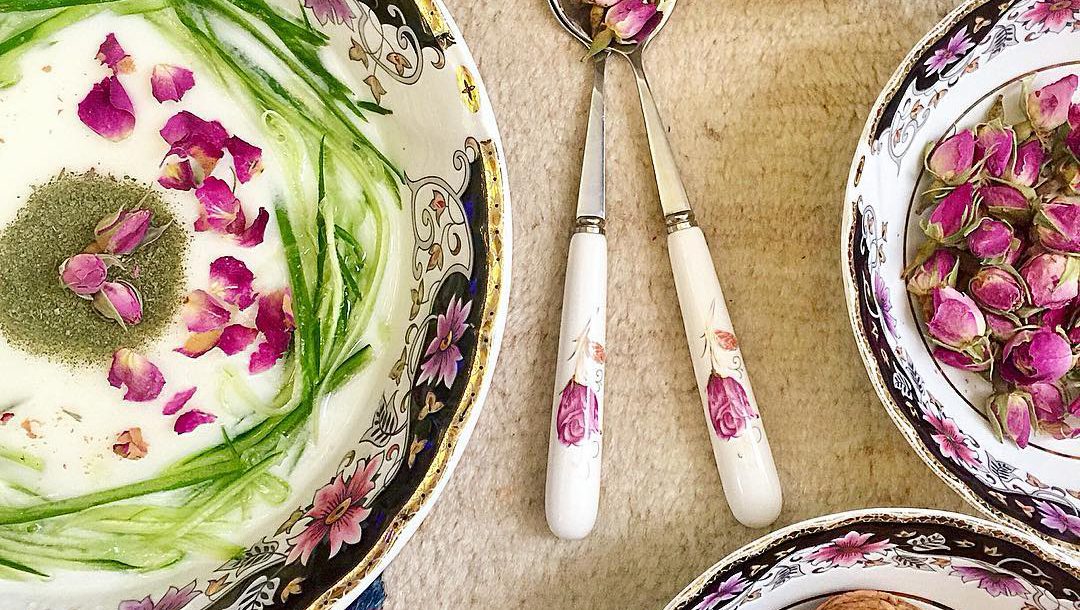 Chill Out During the Sizzling Summer Heat With these Iranian Food

Don’t let the summer heat soak you in sweat with these Persian dishes.

As approximately 2/3 of the Iran is covered by deserts, Iranians experience hot and dry summers. At times even the thought of BBQ can feel like melting under the scorching hot sun, let alone making the regular intricate Persian dishes which take at least 2 hours of heating on the stove. Sounds like a big NO to me!

This is why Iranians also make special summer dishes to survive the summer. They’re simple, easy to make and delicious. These kinds of food usually do not need cooking and revolve around dairy, fruits and vegetables.

This Iranian food  is a soup-like dish which is made by dough, a drink made by beating yogurt or adding water to it, and chopped pieces of cucumber. Cucumber itself has the quality of keeping body temperature low. Dried greens such as mint, flower petals and nuts are also added to the mix for a better taste. Crispy bread is the last ingredient added to the bowl, right before eating. We usually put the mix in the fridge before serving it. 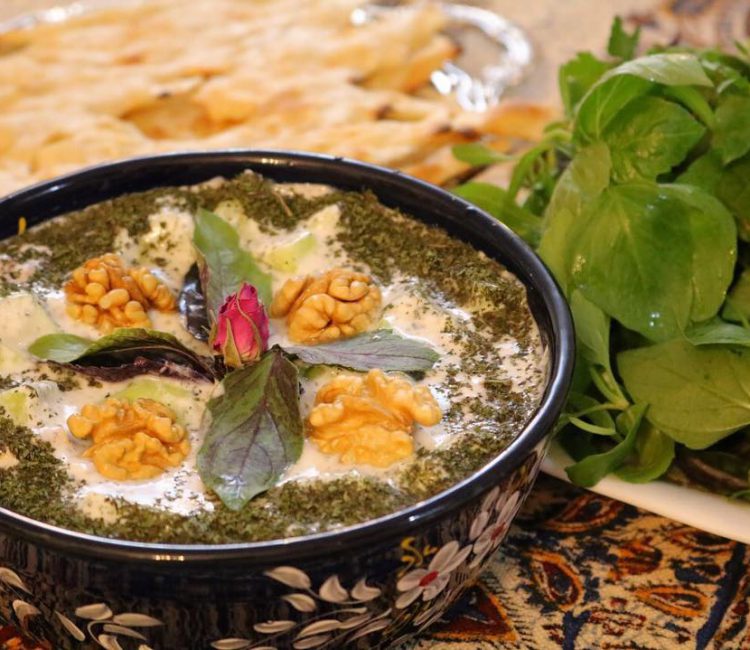 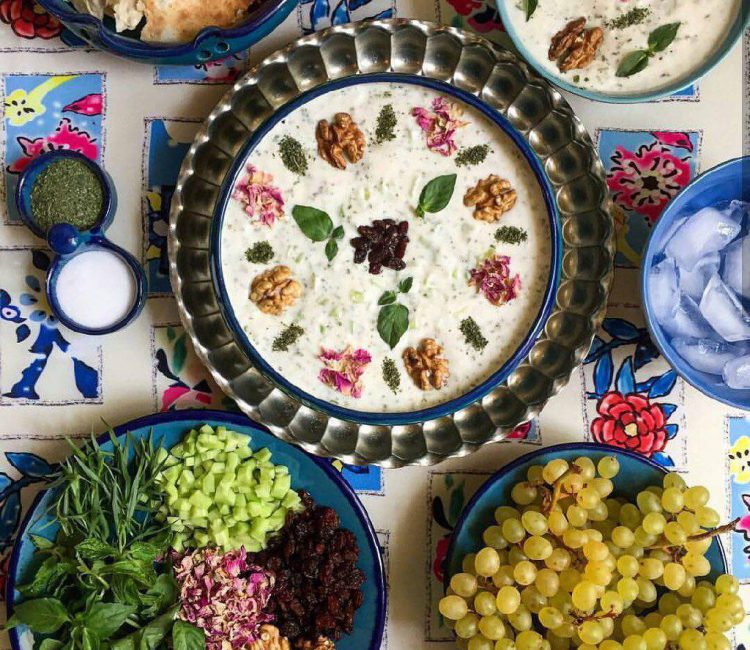 Sekanjabin is one of the most popular summer drinks (sherbet) for Iranians. It is a mixture of water, sugar or honey, vinegar and mint. People usually add lettuce or cucumber to the drink. This can be served both as a drink, if the liquid is not so dense, or as a sauce which is dipped with lettuce. 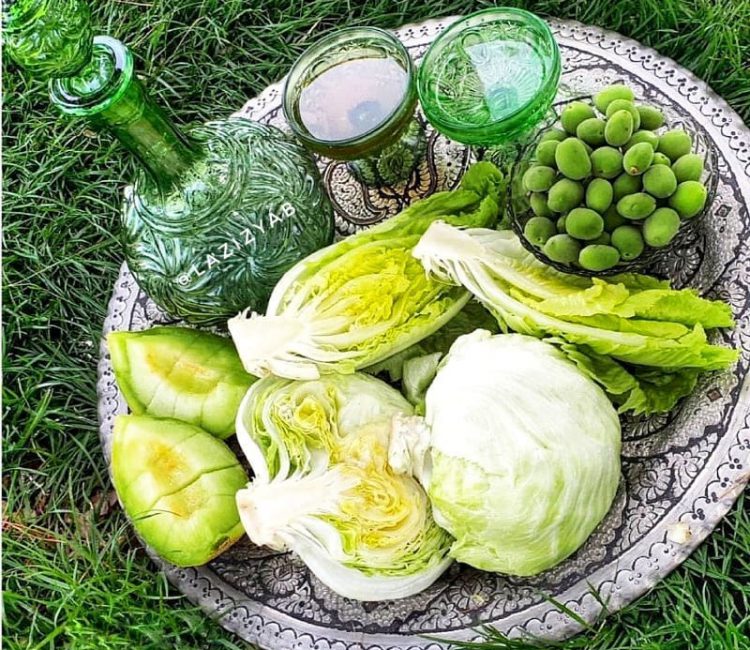 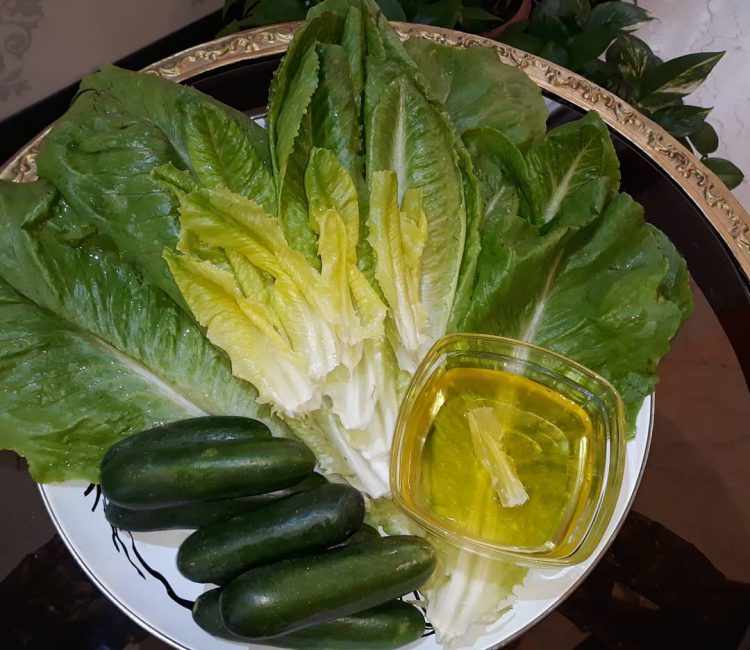 This rice pudding has simple ingredients and is easy to make. Shir means milk and berenj means rice. So basically this is a mixture of rice and milk combined with rose water. Usually, the dish is topped by jam, cinnamon or cardamom and served warm or cold. 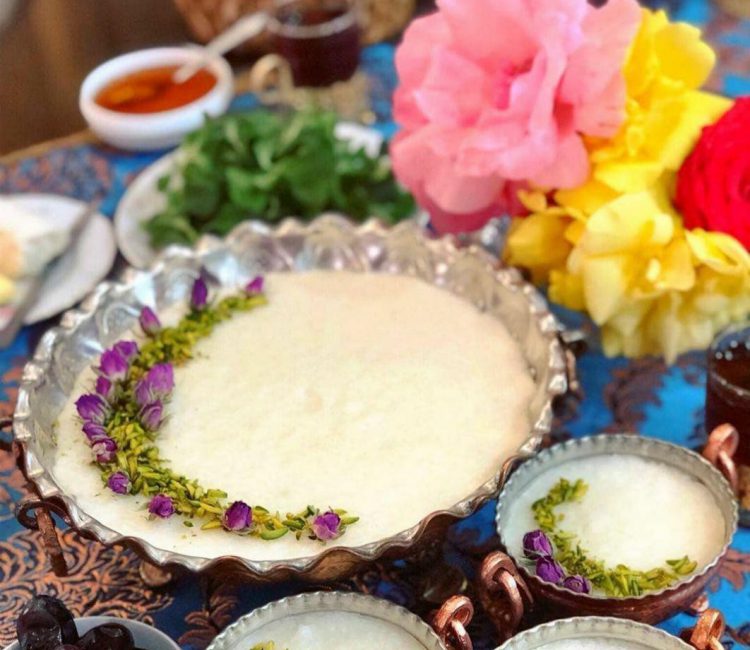 One of the all-time favorites of Iranian food  is cheese sandwich served with herbs and different vegetables such as cucumbers, tomatoes, bell peppers and onions. The more you eat this healthy meal, the more irresistible it gets. And that’s Ok! 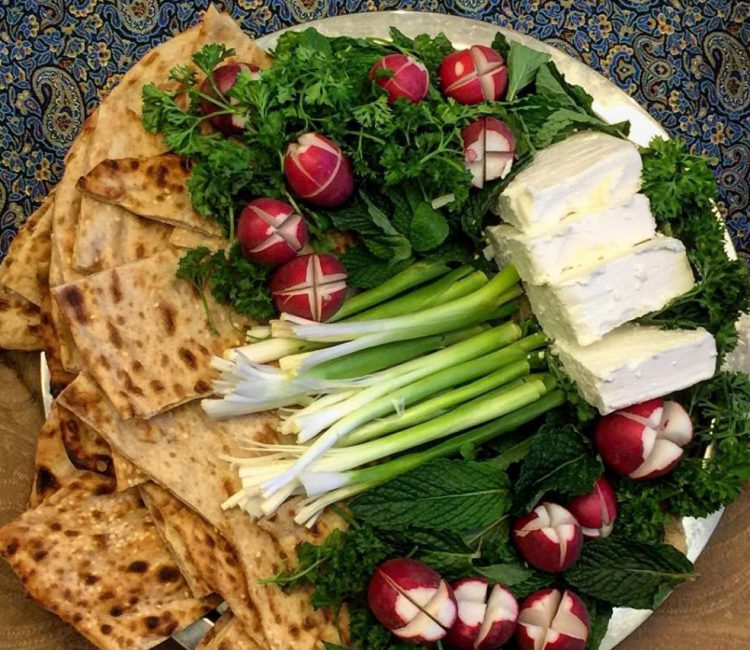 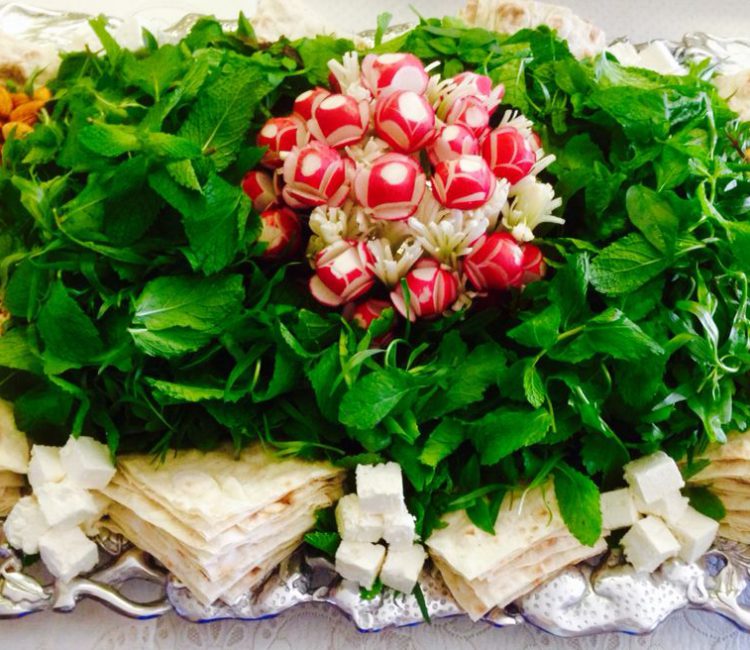 The theory of hot and cold food, which refers to the effect of food on metabolism (rather than food temperature) is an active factor in Persian cuisine. Barley is defined as a cold food, so it is usually used in summer. In addition to barley, the soup consists of meat, onion, turmeric, chickpeas, white beans, lentils, parsley, cilantro, dill, chives, spinach and rice. 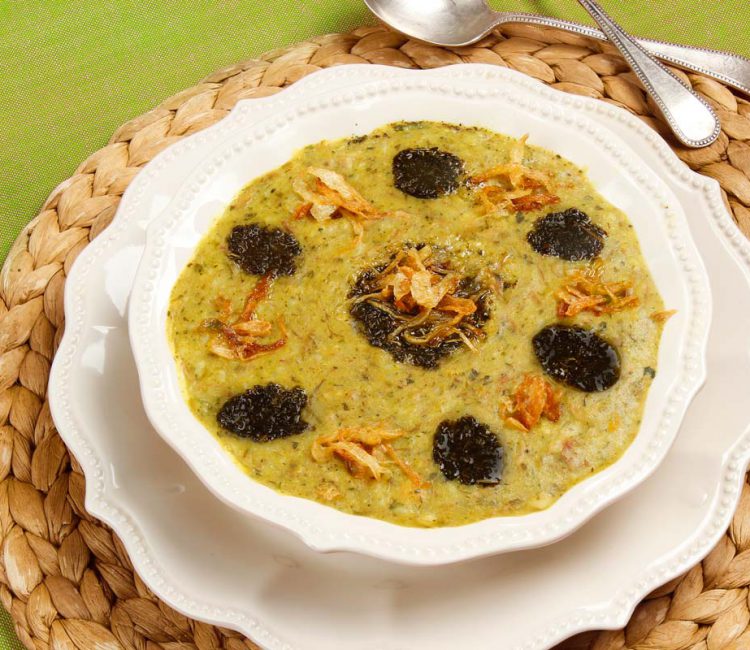 Faloodeh is a cold dessert of thin noodles made by starch and sweet syrup. It is served with lime juice and sometimes nuts. The city of Shiraz in Iran is especially famous for Faloodeh. 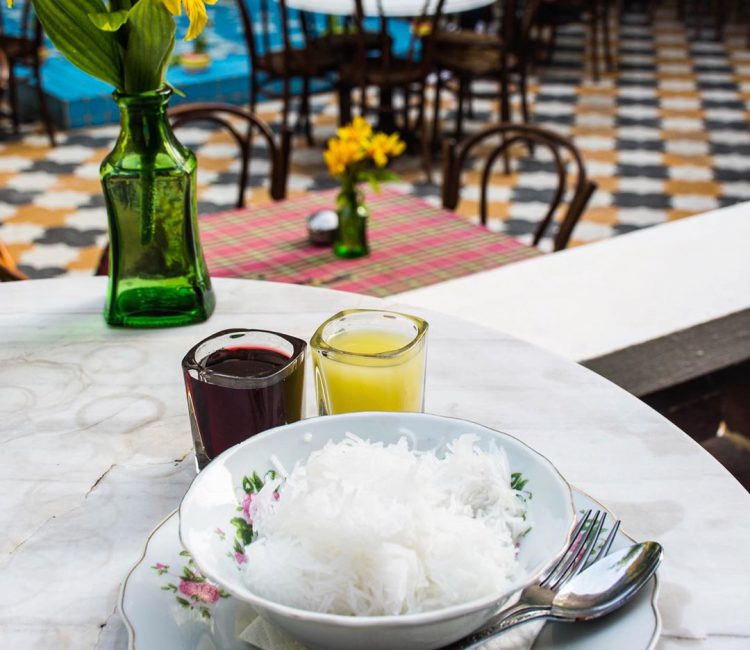 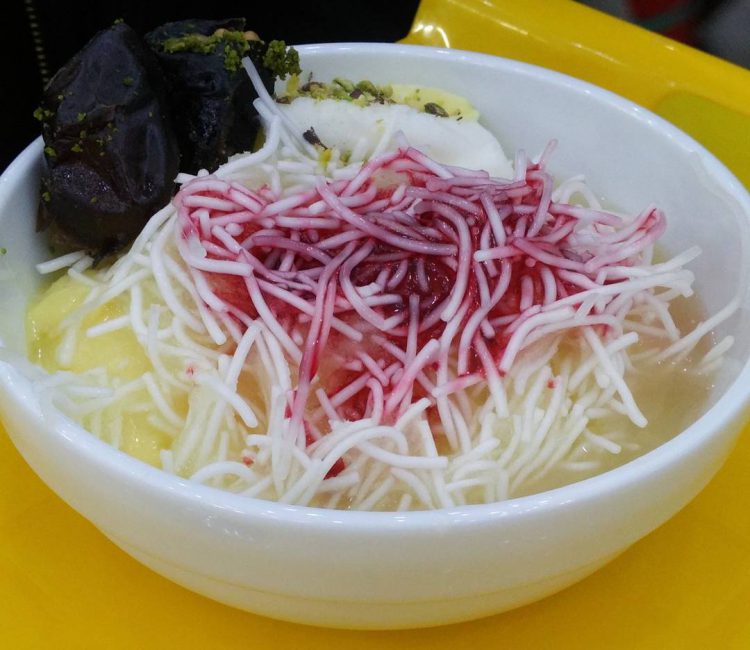 This Persian desert is made by milk, flour, sugar and some other additives such as rosewater. It is either served cold with a sweet syrup as dessert, or warm as food for someone who is feeling a bit under the weather. Fereni is often decorated with pistachios and cinnamon. Remember not to confuse Fereni with Ferni or Kheer, which is an Indian dish rather than Persian dish. 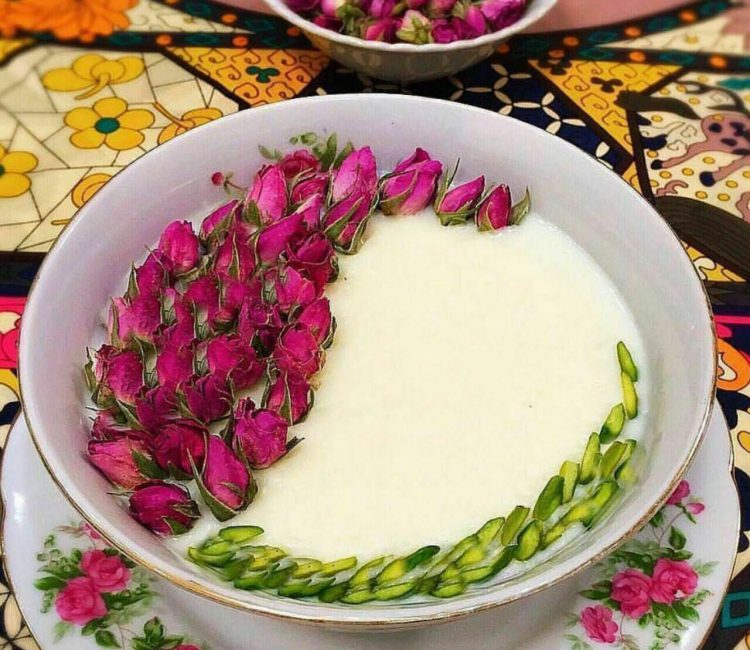 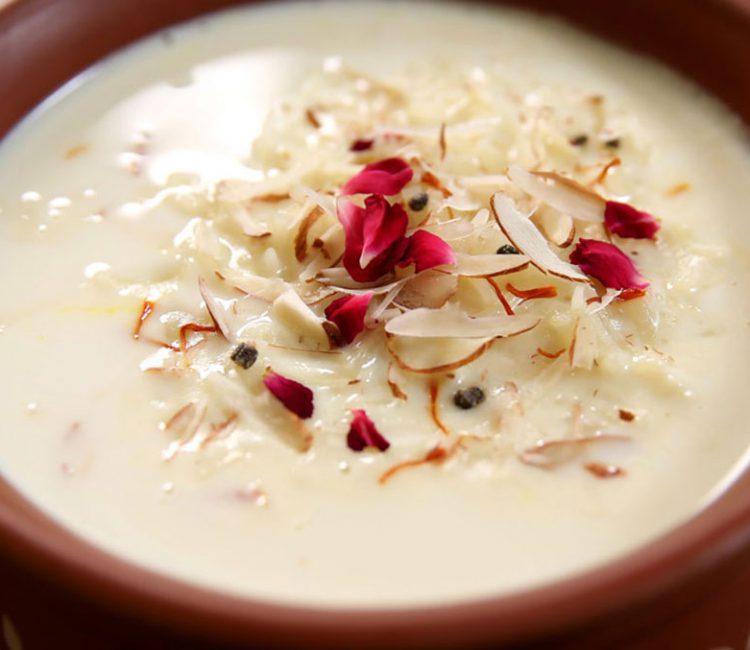 Persian cuisine is famous for its delicious meals. It includes a diversity of dishes made with vegetables, meat and rice, not to mention that barbecue is an essential part of it. While trying summer food is strongly recommended, we strongly recommend you to see how Persian food is made at a local’s house. Check our Persian Dinner Activity and have fun cooking your own Persian meal.

5 Iranian Food You Should Try in Iran.

A Workshop of Tasty Experience of Iranian Cuisine

A Pleasant Homemade Dinner Among an Iranian Family